It’s hard to believe that 20 years ago today we lost our treasured friend and editorial cartoonist, Randy Wicks. Say what you will about Saturday Night Live having a field day with politics and the humor promised by the upcoming election, Randy’s simple drawings of the circus around us brought home the irony, the reality and sometimes the comedy of politics.

Can you just imagine what he’d be drawing now? He’d need to be published three times a day, seven days a week to get them all out.

Only 41 when he abruptly shuffled off this mortal coil, Randy was a local hero who touched the hearts and minds of so many people, especially those of us who worked with him at The Signal. He knew exactly how to zing – gently when appropriate – those whose deeds were questionable or frustrating or just plain ridiculous.

He brought us the heartbreak of starving children in Africa, a look at gun worshipers, the dangers of our own prejudices and the resilience of our community in a crisis, along with a plethora of other local and national issues, depicted perfectly with his “poison pen.”

There wasn’t a situation that escaped his attention. He skewered Presidents and Councilmembers alike, was an observer of local politics and a visitor to the Oval Office and he loved without bounds his beloved Santa Clarita Valley.

A Distinguished Alumni of CalArts, over the 15-plus years that he spent here, his talents were evident in floats he designed for the Fourth of July parade (there was a paper mache Statue of Liberty in the newspaper’s pressroom for a long time, a bit beaten and worn from riding in the back of someone’s pickup truck a few Independence Days prior) and in the countless flyers and programs graced with his quirky and character-driven drawings. 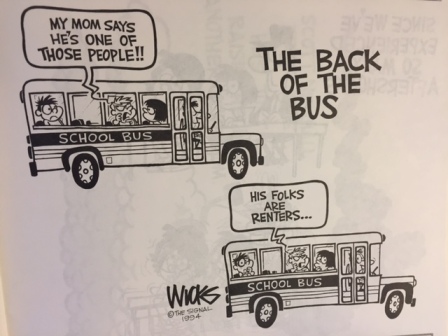 He designed logos for nonprofit organizations, personal friends and the City of Santa Clarita. His was the first Pride Week design, the first River Rally T-shirt, the popular Signal Newshound. He traveled to charity luncheons and school assemblies and gave tours of the newsroom and production area, always bringing along a newsprint pad and Sharpie for on-the-spot creativity.

Sometimes he even drew his co-workers when things were slow. (It’s the most treasured piece of art in my office.)

There wasn’t a kid he didn’t have time for during his visits and tours, or a community leader who didn’t appreciate his contributions (auctions always featured some of his original works) or his political nudges. Randy’s whole purpose in life was to make people think, even if it pissed them off.

No wonder we had to hold his memorial in the gallery at CalArts. The front walk to the Signal was covered in candles and flowers and tributes to this fine young friend to all. The funeral was packed, several speakers, hundreds of tributes from those he touched with his rapier wit and soothed with his compassion. And all for a kid from Iowa who always credited his parents for letting him “follow his cartoon dreams.”

There was a fundraiser shortly after his passing to support a special collection of his cartoons, books that catalogued and contained his published work so that future generations could enjoy them. There was also artwork framed that hung for a while in the Valencia Library, a tribute to Randy’s support of the Friends of the Library. Somewhere in the transition from County to City, those all disappeared, and with them, the memory of Randy’s work and his contributions to our community is beginning to fade as new generations fill our classrooms and libraries. (He would have been thrilled with the Old Town Newhall Library and its homage to history).

The SCV Press Club was also formed in his memory with the purpose of raising scholarship money for students studying First Amendment courses such as journalism. Haven’t heard much of that lately. I’m sure he would have been amused at many of the previous years’ honorees. He and Ruth Newhall are probably still chuckling at her christening of one of the awards the “Ass Kisser Award.” I know someone who is proud to have won it more than once.

Randy would find that funny. And his body-convulsing laugh always made all of us smile, no matter how dangerously close deadline loomed.

A lot has happened in the last two decades. I’m determined to make sure we never forget the Wicked Wicks of the West. Here’s to the memory of a friend whose take on life made the ‘80s and ‘90s a lot more tolerable, brushed with his insights and humor.

I’ll be raising a glass in his honor today. Won’t you join me? Randy was a funny old raccoon that we miss dearly.

Carol Rock is a writer based in the Los Angeles area. She is an award-winning journalist with more than 20 years experience covering all areas of news and features. She works as a freelance public relations and media consultant, with writing remaining her strong suit. Her tattoo, if it were real, would read “Don’t Die Wondering.”

Your comments are encouraged and welcome!

And please feel to share this with your friends throughout social media.